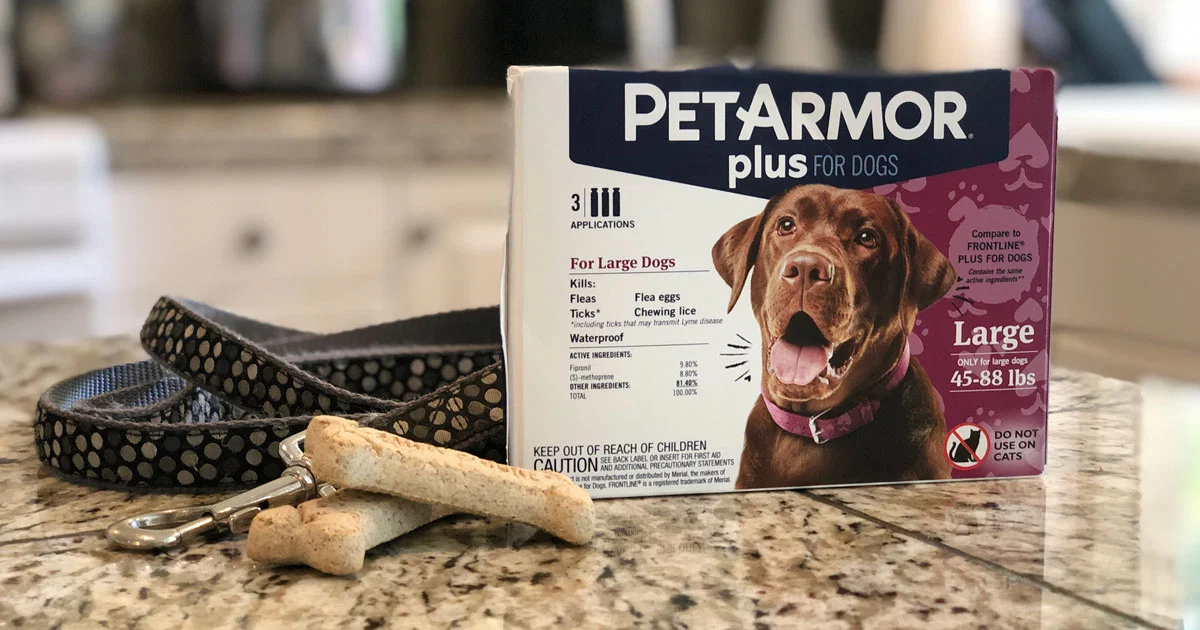 If your pups have fleas, you need to look for a fast-acting treatment that will help get rid of the fleas while preventing future infestations.

While there are numerous options for you, PetArmor’s flea treatments, PetArmor for dogs, and PetArmor Plus, also for dogs, appear to be two of the best flea killers for your doggos. They have some differences, though, which is why you should only settle on either product once you are certain that it offers the high level of protection desired.

Here, we take a look at some of the differences between PetArmor and Pet Armor Plus for Dogs.

PetArmor Vs. PetArmor Plus – Comparison Table

Also known as the ‘normal’ Pet Armor flea treatment for dogs, PetArmor is designed to kills fleas and other bugs effectively within a period of 24 hours after treatment. Its primary active ingredient is Fipronil which kills the adult fleas on contact, meaning that you’ll notice fleas crawling away from your dog’s skin towards the ends of the fur as they are just about to die.

This product is quite popular on the market, not only because of its flea-killing effectiveness but also because it’s quite affordable. Overall customer satisfaction around this product is between 50-60%.

Pet Armor Plus could be thought of as an improved or an advanced version of PetArmor. Unlike the ‘normal’ PetArmor mentioned above, the Pet Armor plus comes with an additional ingredient, S-Methoprene, which increases its efficacy by killing the fleas on the first application. Additionally, S-methoprene also gives this product its power to kill both the adult and young flea, along with the eggs and larvae. Like PetArmor, Pet Armor plus also contains Fipronil that kills the fleas.

With these differences in mind, it makes sense that the customer satisfaction rate for Pet Armor Plus is higher than that of the normal Pet Armor flea treatment.

Pet Armor Vs. Pet Armor Plus – How do they Differ?

To choose between Pet Armor and Pet Armor Plus, we need to look at their main features and how they differ from each other. We’ll do this by looking at the main features that stand out from these two flea treatments.

The effectiveness and the level of protection offered by flea treatments depend on the active ingredients incorporated in the products.

With these two PetArmor products, the difference in their effectiveness lies in the active ingredients incorporated. The active ingredient in these two products is Fipronil, which is released through the top layer of your doggo’s skin, killing the parasitic insects that sit on the skin. At the same time, this active ingredient prevents any new flea parasites from jumping onto the dog. The effects of Fipronil last for about a month.

The difference between these two treatments, as mentioned above, comes from the presence of an additional active ingredient in PetArmor Plus but not in PetArmor. The additional ingredient is S-Methoprene, which boosts the effectiveness of flea treatment by killing adult fleas and baby fleas while interrupting the fleas’ life cycle. It disrupts the maturity and development of the eggs and larvae, meaning an extra layer of protection. The interruption of the life cycle of fleas also means a reduced risk of fleas re-infestation. So, if you are looking for a flea treatment that offers lasting protection, Pet Armor Plus could be a preferable approach for you.

Thanks to the additional ingredients, PetArmor Plus is fast-acting, and this waterproof formula kills larvae, flea eggs, and adult flea continuously for up to 12 weeks. It also gets rid of ticks that transmit Lyme disease. It also gets rid of dog ticks, deer ticks, lone star ticks, and American dog ticks while causing sarcoptic mange in mites.

More on the active ingredients – Fipronil, the common ingredient in both the ‘normal’ and the ‘Plus’ PetArmor flea treatments, is one of the top-recommended flea killers that’s liked by veterinarians. It’s used in pretty much all formulations recommended for killing fleas, with the only difference being the concentration of this compound.

S-Methoprene, on the other hand, kills the eggs and larvae, stopping flea infestations fast. This means that if you are worried that fleas survived the first treatment with Pet Armor, you may want to use Pet Armor Plus for the second course of treatment to get rid of any fleas that may still be alive.

Both anti-flea serums are packed in small tubes that are easy to use. The treatment is applied topically, and you need a few drops of the serum along the dog’s spine or under the clavicle, behind the ears, and under the neck for the best results. To apply, pat down the dog’s fur to expose its skin.

Like most other topical flea drops/ treatments, both PetArmor and PetArmor Plus are quite easy to apply, albeit theoretically. We say this because the successful application of these treatments depends on your ability to keep the dog still for the total amount of time needed for you to apply the treatment.

Generally, most pet parents are happy with these two PetArmor products, with the levels of satisfaction higher for people using the PetArmor Plus. The reason for this has to do with the differences in the formulation of the two products and the fact that the ‘Plus’ lends the PetArmor Flea killer an edge over the normal PetArmor flea killer by killing the adult fleas, along with the eggs and larvae, effectively destroying the bug’s lifecycle. You’d only have to use it again in a month to be sure that you have a handle on the flea issue.

Both products start working in 24 hours, and the protective effects of the treatments last for a maximum of 1 month.

With these considerations in mind, PetArmor Plus would be a better option to buy if you want to end the flea infestation easily.

If you are treating puppies, however, the normal Pet Armor would be an ideal treatment for you.

Are these products pet and/ or child safe?

Not entirely. So, like other pesticides, they should be kept out of reach of kids and pets

Landon Easton is a professional in pest control and has observed that most homeowners, will fumigate their homes, but overlook many of the potential pest-infected areas. And because of the above, he advises individuals to get the help of a professional if the infestation is extensive and beyond their control. According to Landon, professionals in pest management have hands-on experience given that they have worked in many different properties and can, therefore, easily figure out areas that are likely to be more infested. Mild pest infestation can be handled with the common insecticides, or better yet, you could consult the comprehensive excerpts at Your Pest Guide when unsure about dealing with particular types of pests.

Argentine ants grow into supercolonies, and they can be difficult to deal with, especially as the colonies grow bigger. But there is a strategy that’s proven the most effective in getting rid of...

Crazy ants are a relatively new, highly invasive species of ants strangely attracted to the electrical equipment of all kinds, and their elimination in the fastest way possible is important. Due...

Landon Easton is a professional in pest control and has observed that most homeowners, will fumigate their homes, but overlook many of the potential pest-infected areas. And because of the above, he advises individuals to get the help of a professional if the infestation is extensive and beyond their control. According to Landon, professionals in pest management have hands-on experience given that they have worked in many different properties and can, therefore, easily figure out areas that are likely to be more infested.

Mild pest infestation can be handled with the common insecticides, or better yet, you could consult the comprehensive excerpts at Your Pest Guide when unsure about dealing with particular types of pests.